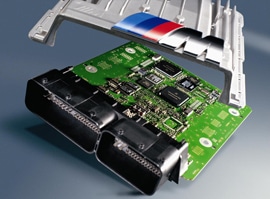 How an Engine Control Unit Has an Influence on Auto Performance

Under the hood of an automobile beats the heart of an amazing piece of machinery. The engine of modern cars has evolved significantly over the years, and it is not the same internal combustion machine developed by Henry Ford. There is a complexity never before imagined, and the Engine Control Unit (ECU) plays a major role in the performance of the engine of a car’s fuel injection system.

The Basics of the ECU

The ECU is not a jumble of belts and wires at all. This particular part of the car has a high level of sophistication, and makes use of microprocessors and sensor data that can be processed to perform in real time. As a part of modern technical advance, the ECU is not something that is ordinarily fine-tuned with a monkey wrench or pair of pliers. The firmware is something that can be reprogrammed with new computer code, or the replacement of a microchip that is about the size of a small finger. This is something that governs the activity of a car through computer calculation more than pistons pumping up and down.

The amount of fuel input into the system will determine the acceleration, and the ECU of a fuel injection system will decide how much fuel will be released into the internal combustion. Increase airflow from the throttle will cause the ECU to inject more gasoline. In colder weather when the engine is not sufficiently warm, the ECU will compensate by supplying the engine with a little bit more fuel until the heat has increased. The ignition is influenced by the ECU which will alter the timing slightly to help with the fuel economy of the vehicle. There is an ability to control idle speed with the ECU, and if the engine is equipped with variable valve timing and the driver wishes go a bit faster, the ECU will open the valves a little bit sooner to increase necessary airflow.

The internal workings of the ECU are heavily influenced by sensors that provide necessary information to it. Mass airflow sensors will supply air mass information which in turn allows the ECU to deliver the proper amount of fuel to the engine. Other sensors whose data is used by the ECU includes a throttle position sensor, coolant temperature sensor, voltage sensor, manifold absolute pressure sensor, and the engine speed sensor. What these will do is help the ECU better adjust operating temperature and system voltage among other necessary actions.

The Advantages of the ECU

Anyone who owns a high-performance automobile has to appreciate that an ECU is more than just a fancy looking gadget. This is all part of an engine management system that will allow for a much better fuel economy and a more responsive performance. It also means there is a smaller amount of emission coming from the vehicle, which is great for the environment.

The amount of data that goes through the ECU for processing is staggering. There are multiple operations which have to be performed almost simultaneously to achieve maximum performance. The beauty of the ECU is that it permits processing of all the information that is received by the engine with the sensors. The car responds far better and much quicker because of this. The sophistication of the ECU is such that a car company can program information so one car model may have a very smooth ride, while another has more of a racing flair to it. It is also possible to have both qualities in the same vehicle and that is another quite astounding dimension of the ECU.

The desired performance may require the ECU be reprogrammed on a periodic basis to better accommodate the need for improved performance. This can be done and any car owner should appreciate is the technological advance. The ECU of a high-performance car permits the kind of response that is simply not possible in an automobile that does not have it. What also is amazing about the ECU is that its size is incredibly small, and yet it has the ability to control all the major working parts of the engine, and deliver the kind of performance that makes driving more pleasure than a challenge.