The BMW car model has commanded respect for decades. This is well-earned because underneath the hood it is a master work of craftsmanship. Parts do wear down, and the owner has to bring his or her BMW to an automotive repair shop for possible part replacement. It is strongly suggested that only BMW factory parts be used. 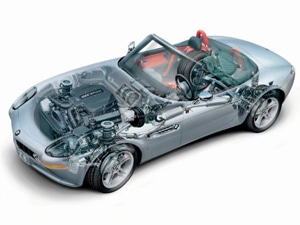 These are commonly referred to as Original Equipment Manufacturer, or OEM. An auto manufacturer does not make a car with only one set of parts. Knowing that sooner or later there will be a need for replacement work, specifications for each part of the car are created. These are sent to a parts manufacturer who uses the blue prints to create a supply of parts. What this means is that whenever repair or replacement work is done on a BMW, the OEM parts are the same as those which were part of the automobile when it first came off the assembly line. OEM parts are literally as good as new. The alternative to OEM is known as aftermarket parts. The manufactures of these parts are not based on OEM specifications, but copies of the parts. A difficulty arises when it comes to quality. Aftermarket parts may be produced from material that is not set to the same high standards as the OEM products. It would seem almost a no-brainer to go with the OEM parts, but there are some constraints.

Insurance companies are more inclined to the aftermarket variety of parts. The primary reason for this is that they cost less. Even though a BMW owner who has experienced a collision has insurance coverage, if he or she authorizes the use of OEM parts, the insurance company could insist that the difference between the aftermarket parts and the OEM parts be paid by the policyholder. It can be a very strong inducement for the car owner to use aftermarket parts, even though the quality may be inferior.

This insistence on the part of insurance company can make things difficult for a car owner. Decisions are not made any easier when the question of the warranty arises. Car manufacturers are just as adamant about the use of parts. BMW provides warranties on OEM parts but will not do the same for the aftermarket products. The warranty may cover the labor involved, which would reduce the overall difference in price between the OEM and the aftermarket parts. BMW owners should also keep in mind the potential risks of using aftermarket brands. The expense can be both in cash and driving quality.

Aftermarket parts can be a gamble that the BMW owner might lose. The fabricated pieces that rely on a best estimate may not fit in well with the surrounding engine components. A consequence may be more maintenance or repair work having to be scheduled, creating costs that ultimately are more than the OEM parts. Those who drive a BMW need to add to the equation the quality of the vehicle which they happen to own. They did not put down tens of thousands of dollars more than the cost of another car model to get an inferior ride. OEM parts are a better option when it comes to quality performance. These are the same as the parts that were in the BMW as it was parked in the dealer showcase. Aftermarket parts are cheaper in price but are not set to the same quality standards. A BMW owner may notice an undesired change in performance as a result.

The BMW is a top of the line model of automobile. It is purchased not just for its looks but also for the drive. The money initially invested in the purchase justifies keeping the BMW performing at peak efficiency for as long as possible. OEM parts can do that; the aftermarket’s ability is questionable.

It happens many times that if you buy cheaper products you get less than quality results. That is the overall problem with using the aftermarket stuff. The performance of the BMW may go down a notch or two, but that won’t happen when the OEM variety is used for replacement or repair. In terms of overall investment in the automobile, OEM automotive parts assure a stronger ROI.